SIGNAL is a think tank and academic organization based in Israel focusing on China and China-Israel relations. SIGNAL’s team brings decades of expertise and fieldwork in China to our applied research and programs. In our effort to cultivate in China a greater understanding of Israel and the Middle East and to deepen Israel’s knowledge of China, SIGNAL employs a mix of academic programming, policy research, strategic analysis, publishing, and convening.

SIGNAL has held over 1000 briefings, dialogues and events in China on a range of policy topics with diplomats, experts, scholars and entrepreneurs in the China-Israel ecosystem. Leaders in their fields from US, Europe, and Southeast Asia periodically add a global perspective to the conversation. Our dialogues aim to stimulate debate and offer creative yet practical solutions to some of the most pressing issues affecting Sino-Israeli relations – including the shifting US-China dynamic.

Since 2011, SIGNAL’s academic focus has brought Israel studies to universities across China, a program recognized by China’s Ministry of Education in 2013. Our intensive program, designed jointly by SIGNAL and the Israel Studies Institute at the Sde Boker campus of Ben Gurion University, has trained over 50 Chinese faculty. Each year thousands of Chinese students are exposed to Israel’s history, society, and regional relations through SIGNAL’s work.

SIGNAL is led by China experts who made aliyah from the US, Brazil, and South Africa. In our capacity-building effort, we work with over 40 professors and SIGNAL Fellows from around the world who regularly participate in our programs and projects. 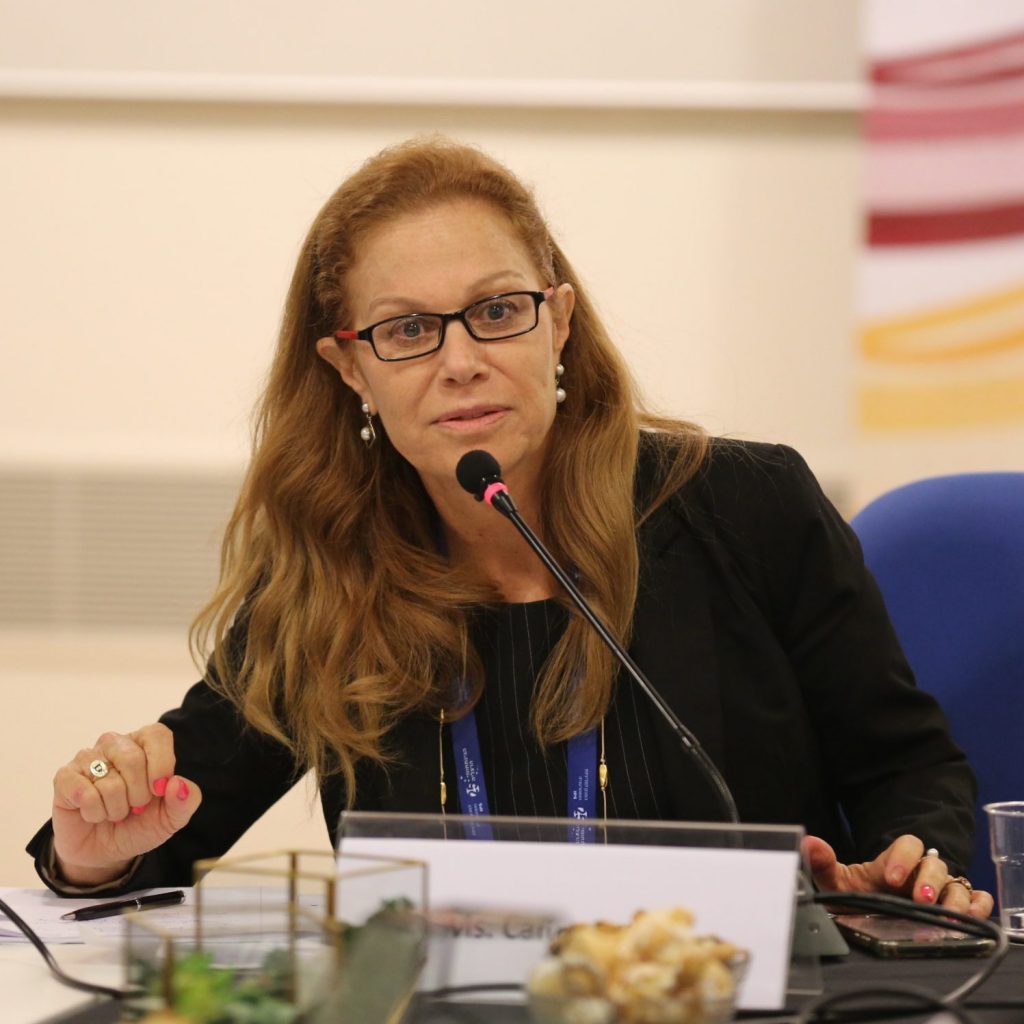 Carice Witte is the Founder and Executive Director of SIGNAL (Sino-Israel Global Network & Academic Leadership), an Israeli policy organization that specializes on China-Israel relations.  Ms. Witte initiated Chinese-Israeli Track-II exchanges in 2011. Having led over 1,000 briefings in China and Israel, she established a semi-annual China-Israel and annual China-Israel-U.S. Track-II dialogue in 2017.

In 2011, Ms. Witte initiated the founding of Israel Studies Programs (ISPs) at universities across China, including an annual program held in Israel for Chinese faculty on teaching Israel Studies.

An expert on China and China-Israel relations, Ms. Witte is a leading contributor to defining this field of policy research in Israel. Ms. Witte has authored articles, research and policy analysis papers on Sino-Israel relations, trade policy, strategic communications, and global Jewry. Her research focuses on Israel’s perspective on Xi Jinping Thought and its potential implications for the Middle East, Israel and the BRI, China in the Middle East, and China’s foreign policy.

After immigrating to Israel from the US in 1987, and until forming SIGNAL, Ms. Witte pursued an entrepreneurial career in international real estate and Israeli high-tech, working with leading European banks. She is a graduate of Yale University. Ms. Witte lives in Israel with her 5 children and 3 grandchildren.

Director Of Research And Strategy​

As a psychologist, Dale is acutely aware of the psychosocial dynamics and cognitive biases that influence decision-making and foreign policy. Mr. Aluf draws on this expertise to inform his strategic assessments and facilitate cross-cultural understanding in international relations. His analysis has been featured in The Asia Times, Jerusalem Post, The Times of Israel, The Jewish Journal, and Medium.

Before joining SIGNAL in 2017, Dale worked for eight years in Israel’s Aviation sector, conducting various security assessments in Africa, Asia, and Europe. While living in South Africa, he received training in psychodynamic group analysis and practiced as a rehabilitation specialist. Dale holds an MSc in Applied Psychology from the University of Liverpool and is a member of the International Society of Political Psychology. 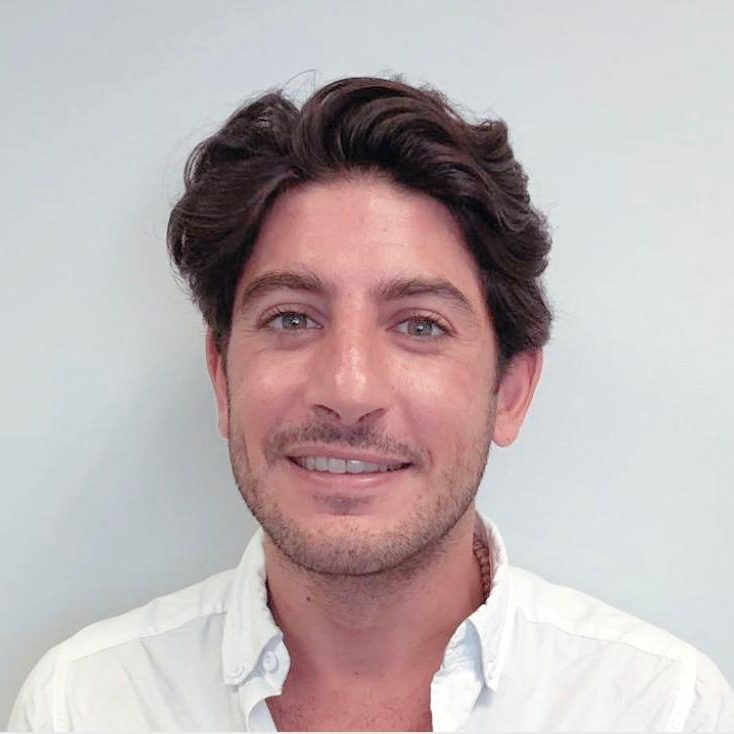 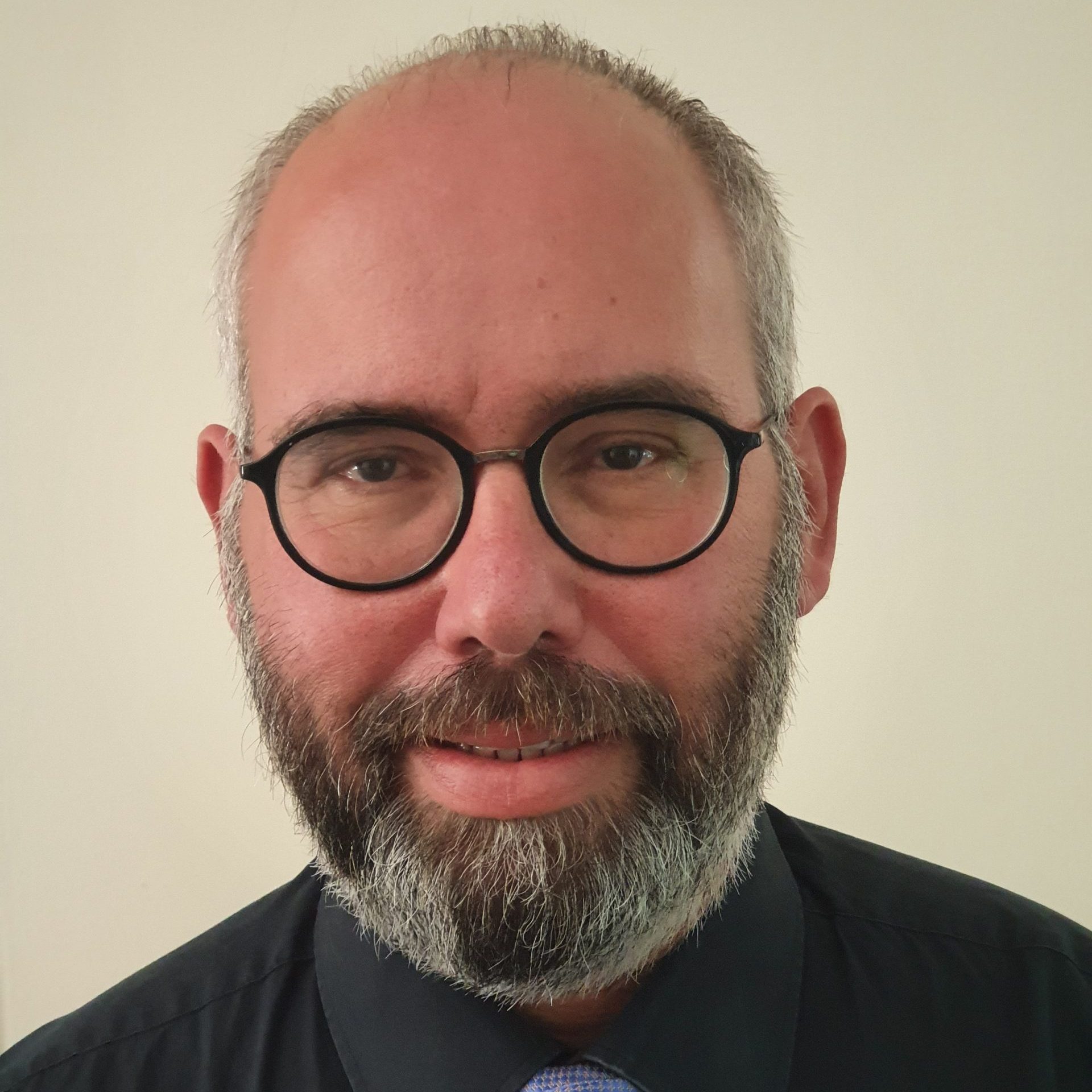 Tommy Steiner is an Associate Fellow at the Henry Jackson Society and a policy consultant for SIGNAL, an Israeli policy organization focusing on China and China-Israel relations. Concurrently, he is an Adjunct Lecturer and teaches International Relations and Security Studies at the Lauder School of Government, IDC Herzliya, Israel.

Until recently, Tommy was a senior research fellow at IDC Herzliya’s Institute for Policy and Strategy. A member of the founding team of the Annual Herzliya Conference Series, Tommy managed the Conference series from 2007 through 2013 – a period during which the Conference became considered one of the top international policy conferences. At the Institute, Tommy authored and edited strategic reports on Israel, the Middle East and global affairs.

Tommy served as the executive director of the Atlantic Forum of Israel, a network-based policy organization that promoted and advanced Israel’s relations with the Transatlantic Community and Europe, and which was especially instrumental in enhancing NATO-Israel relations.

Tommy resides with his wife Shirley in Herzliya, Israel, and they raise Tommy’s children Jonathan, Ariel, and Talya, along with Shirley’s children, Ilay and Noya.

Ms. Evelyn Gesua manages and coordinates projects and events in all of SIGNAL’s departments. In 2019, she produced SIGNAL’s 4th annual conference on Israel’s China policy, held at the Airforce Center in Herzliya, Israel with over 300 in attendance. In 2020, Ms. Gesua led SIGNAL’s 10th Anniversary programs including creating a new website and the major launch event for Kesher, SIGNAL’s on-line Israel Studies E-learning platform.

Immigrating to Israel from Venezuela as a child, from a young age, Ms. Gesua has understood the importance of effective cross-cultural communication. Fluent in Hebrew, English and Spanish, she earned her BA in Asian and Multidisciplinary Studies, with a concentration on China, from Tel Aviv University. Ms. Gesua studied Mandarin in China, living in Sichuan, Chengdu in western China as well as in Beijing. The Chinese cultural immersion provided the insights and awareness necessary to be effective in geopolitical relations with between Israel and China.

Before working at SIGNAL, she held Coordinator positions at JOINT Israel (JDC) and “Ahari!” Association, organizations dedicated to promoting Israeli society via educational programs and social services. Ms. Gesua served in the Israel Defense Forces as an Observer on the Egyptian border and a Team Commander for the Intelligence Corps. She was released upon service completion with the rank of Sergeant. 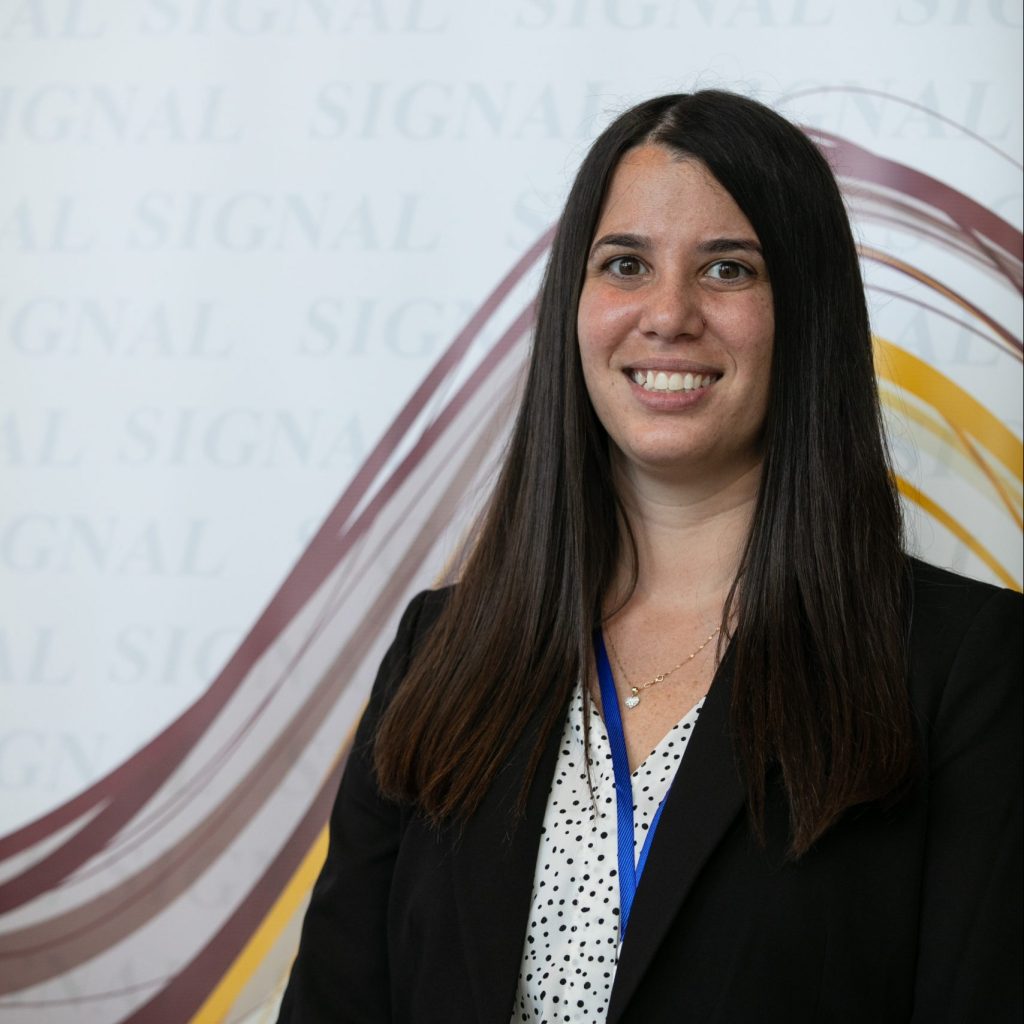 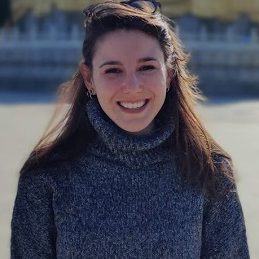 Katya Smelov oversees SIGNAL’s academic initiatives, including the Israel Studies Program (ISP) and Faculty Training Program (FTP). After completing her military service in the Israel Defense Force, Ms. Smelov attended Tel Aviv University, where she earned her BA in East Asian Studies and Linguistics. Upon graduation, she received a full scholarship to study Chinese at Zhejiang University in Hangzhou, China. During her studies, Ms. Smelov secured another scholarship to attend the university’s International Business School. In June 2020, after defending her thesis, “The Influence of Foreign Multinationals on Israeli Startups,” she graduated with her Master’s degree. Before moving to Hangzhou, Ms. Smelov was a Business Developer at the Hong Kong Trade Development Council (HKTDC). She speaks Hebrew, English, Russian, and Mandarin.

Ms. Guan Yuan joined SIGNAL as an intern in translation in 2012. She officially  joined the SIGNAL team as a professional translator in late 2013 after attaining her MA in English Translation and Interpretation from China University of Petroleum. Ms. Guan focused on translating materials for the Israel Resources Center, a SIGNAL on-line library of introductory to scholarly materials about Israel.  Ms. Guan’s years of association with SIGNAL have provided important insights into Israel that facilitate the subtly accurate translations. In 2014, Ms. Guan’s role at SIGNAL expanded to include ISP (Israel Studies Program) Coordinator in China in March 2014, assisting SIGNAL in establishing and supporting the study of Israel at universities across China.  In 2016, Ms. Guan became SIGNAL’s China coordinator, adding to her area of responsibility the management of SIGNAL’s quarterly delegations of scholars and experts from Israel to Beijing. Ms. Guan visited Israel in 2013 on an academic exchange program at Ben Gurion University to expand her expertise on Israel.  She returned to Israel in 2019 to accompany the Chinese delegation from the School of International Studies (SIS) of Renmin University for the SIGNAL-SIS China-Israel-US annual track II dialogue.

Ms. Guan has over 9 years’ experience in international business and translation. 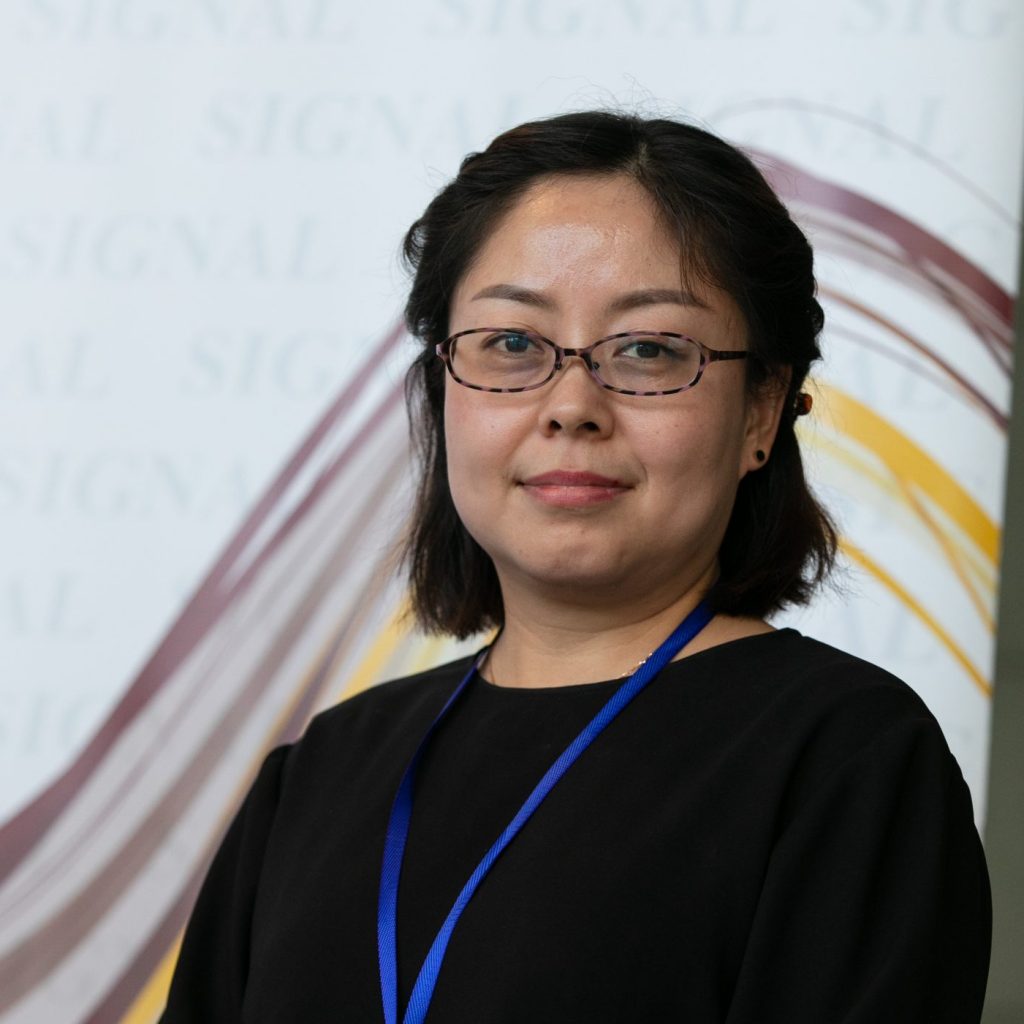 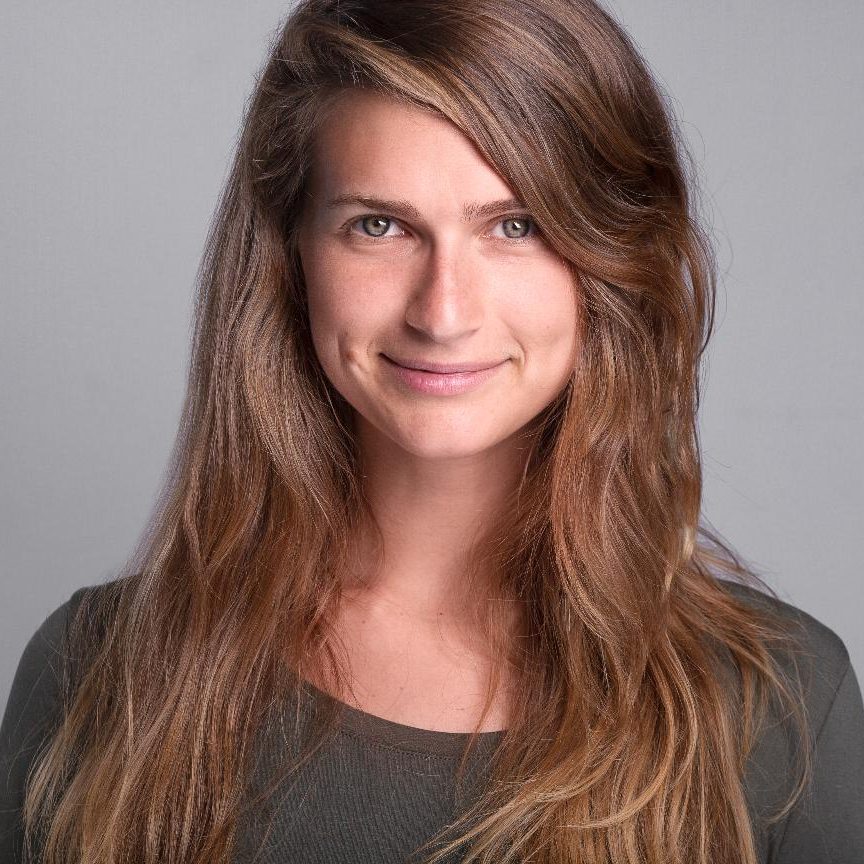 Ms. Yacknin-Dawson conducts research and supports projects and programs in SIGNAL’s department of Research and Strategy and the department of Academic Programs of Israel Studies in China.  Ms.Yacknin-Dawson produces SIGNAL’s monthly ‘Insider’s Briefing’ on China and its growing global footprint, researches graphics and content for SIGNAL’s Kesher digital productions of Israel Studies lectures by Israeli professors and carries out research for a range of projects concerning China, China-Israel relations and China’s international affairs.

Ms. Yacknin-Dawson earned a BA in History and Anthropology at the University of Pittsburgh, and an MA in Public Policy, with a focus on Conflict Resolution, from Tel Aviv University. Her previous position included research as a Content Writer. Prior to this Ms. Yacknin-Dawson was an English Teacher working with underprivileged Israeli students to develop cross-cultural communication skills. Her research interests include women’s studies, the present-day role of historical wisdom, and the mechanisms of generating identity.